I hope all of you are enjoying February. At this point though, I'm ready for winter to be over. I've had enough of this weird rainy, snowy, cold season. Spring can come any day now. I'm longing for the lake to lose it's layers of ice and the buds on the trees to start poking through and add colour to this grey and white landscape. I'm tired of my winter jacket and snow boots, and having to huddle in front of the space heater every morning waiting for the house to heat up. It was fun during the late fall and christmas season, but now I just want to be warm and sun-kissed again. Can I get an Amen?


Josh and I have been house-hunting like mad lately. We've been in homes all over Grey and Bruce County, as well as the South Bruce Peninsula. Since Josh and I are still fairly new in our careers we've been looking at real estate in the 'starter homes' section. So far, everything we've seen needs way too much work- homes are half sunken into the earth, floors and roofs need replacing, the basement is full of water and runs the risk of flooding the upper levels… Josh and his dad are both men that can handle a huge building project, but the money that we'd have to put into the house for repairs wouldn't be worth it.


We don't want an apartment because we have enough for a down payment on a home, so why pay rent when we could pay a mortgage for the same price and get something out of it in the end? My parents have decided to let us stay at the cottage for a while longer until something perfect shows up on the market. We hope it's soon, but at the same time, summer on the lake? That would be nice. We'll see what happens.


I'm excited to be booking weddings already for the summer! I can't believe how blessed I am to be able to do something I love as a full time career. My new Taylor Rebecca Photography website is about to be launched, as well as a few other things that I can't wait for you to see. This spring and summer will be very very fun. Stay tuned. :)


I have been able to see my family a lot over the past month. Last Sunday was slightly dramatic, as my twitter followers may have seen. We were driving home from church in a convoy, with Josh and I in the lead. On the road adjacent to my parents' farm Josh and I saw a huge clump of auburn hair lying in the snow. I made him stop the car and back up so we could get a better look, and after a closer examination we discovered a pool of blood as well as skin attached to the roots of the hair. I freaked out, saying we needed to call the cops because some poor girl had been abducted, or worse. My sisters put the long hair in a grocery bag and even collected a sample of the blood. (Yes, I'm aware we sound nuts, but if this really was a crime scene it was about to get blown away in the snow squalls we were having that day.)


I could tell Josh was disturbed by this whole situation, but being the calm, collected, graduated police student that he is, he didn't show any signs of fear. When we got home my mom forced my reluctant dad to call our local OPP office and tell them what happened. He finally did, and explained that it was probably nothing, but if it was something, they should know. Half an hour later a cruiser came up the lane way and a serious looking officer sauntered up our front steps. My sisters and I handed him our evidence proudly and explained that the only reason we tampered with it was because it was about to be blown away in the storm. We could tell he was nervous to look in the bag. He hesitated, and I swear I could see his hands shaking. When he saw the hair his face went grave and I started silently freaking out. "You were right to call us," he said.


Then he reached in and felt the hair, and paused. When he looked up he was smiling. "This is horse hair, you guys. Feel how thick and coarse it is!" He passed it around the room and we were all so embarrassed. Woops, sorry officer. We discovered that the hair had been pulled out of one of our neighbour's horses' tails. Probably by a coyote. The cop started killing himself laughing, but told us we did the right thing by letting them know. It did look like human hair.


After he left my dad shook his head saying that our family has the worst rep in the history of Bruce County for having the cops show up for no reason; accidental pocket dialings, broken necks that turned out to be merely a goose egg, potential burglaries, and one time our phone was left off the hook all day and my grandma assumed we were being held hostage, so she made the police come investigate. Ohhh well, alls well that ends well, right?


Josh and I had a wonderful first valentine's day as a married couple. We were supposed to have dinner reservations at Rosina's, an elegant italian restaurant in Port Elgin, but they were closed until February 14th and by the time we got a hold of them they were fully booked. Josh went out and picked up a bottle of red wine, strawberries and milk chocolate for melting. We packed a little picnic and headed into the trail system in the forest behind our home. Deep in the woods Josh chose a fallen tree to spread the blanket on, and we enjoyed the drink and food. We stayed out there for an hour before it got chilly (and the resident coyotes started trying to pick fights with April) and we headed home, where we made pad thai and bruschetta and finished the rest of our wine by candlelight. It made for a romantic evening.
Summer, Violet and April are all maturing into well-behaved little creatures. April had a faze where she destroyed everything in sight, but thankfully she's coming out of that now. Maybe she was teething? I don't know. She still sleeps in the bed with us, although now she knows not to hog the entire space. She curls up under the sheets and shares a pillow with Josh. Never, ever thought I'd see the day. I guess that's what happens when you fall head over heels for a helpless stray.
I'm about to go work on my website! I want to launch it soon, it's almost finished! Enjoy the rest of February, try to stay warm! 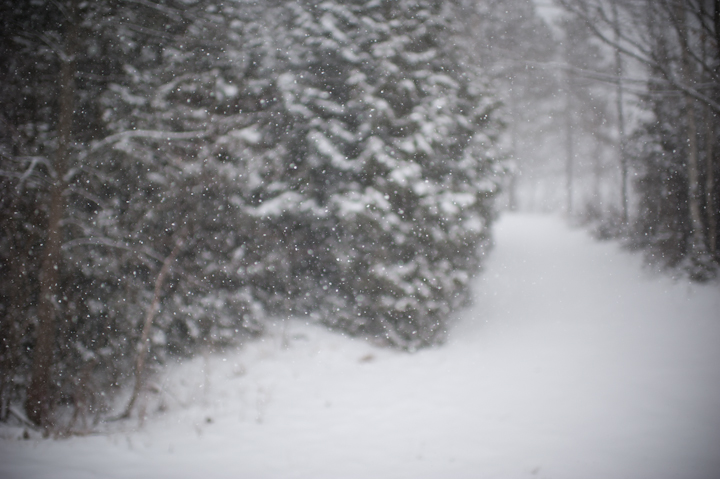